I’ll try my best to fulfil the given responsibility: Banwarilal Purohit on being appointed as Governor of Assam pic.twitter.com/6CFFVmLSG8

Banwarilal Purohit was a Member of Parliament from the Nagpur (Lok Sabha constituency) three times, twice as a Congress member, once as a BJP member. In 1984, he was elected to the 8th Lok Sabha as member of Congress Party. He was re-elected in 1989 on Congress ticket.

Later he joined Bharatiya Janata Party when it launched a movement to build Ram Temple in Ayodhya, and contested Lok Sabha elections in 1991 as the party’s candidate. But he lost to Datta Meghe of Congress. In 1996 he was elected to 11th Lok Sabha as BJP’s candidate. In 2009 he again contested on BJP’s ticket but lost the election to Vilas Muttemwar of Congress.

Made with in India
www.rahulbohra.com

For more details you may reach us

We're not around right now. But you can send us an email and we'll get back to you, asap. 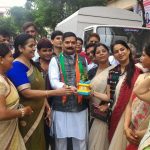